Story and Photos by Michael Kisekka
Fiercely independent, Charlotte Mbabazi disliked depending on her parents. For that not to happen, she started saving part of the pocket money that her parents gave her while a student at Uganda Christian University (UCU). Those savings became a pillar for her livelihood after school.

At the time Mbabazi graduated with a Bachelor of Arts with Education degree in 2020, just like everyone else, she had not anticipated a lockdown due to the devastating effects of Covid-19. The lockdown meant she could not get a school to teach since schools had been shut in Uganda.

The 25-year-old, however, had a fall back plan.  It was the sh5m (about $1,300) that she had saved while at UCU. She had the money, but no idea where to invest it. After some thinking, she started a retail shop. Everything was on standstill at the time, but people still needed groceries. So, she thought the answer would be a grocery shop. The location was on the Wandegeya-Bugujju road, adjacent to UCU. She used the sh5m to pay rent, renovate the shop and purchase the groceries to sell.

At the time, businesses were folding because of the impact of the lockdown in Uganda. She did not tell her parents as she set up the business for two reasons: 1) She hadn’t shared that she was saving their money; and 2) selling groceries was considered something for the lowly educated. In fact, Mbabazi’s peers often mocked her about her choice of business.

“People will always talk, regardless of what you do,” Mbabazi said. “But you have to remain focused and aim at achieving your goal.”

When she eventually broke the news to her parents, she said they were more than delighted. In fact, they even supported her with more capital to increase her stock in the shop.

As with all businesses, Mbabazi’s, too, was not short of challenges. She said she faced competition in the business, especially given the fact that she was just a beginner. Eventually when she opened the shop, Mbabazi worked on all days of the week, exposing her to burnout. However, her never-give-up attitude kept her afloat. She soon found ways to work around the obstacles.

“I had to find out how people who owned retail shops around me operated their businesses and how they sold their commodities,” she said.  “I also found time to interact with customers, which gave me opportunity to get direct feedback and improve on how to handle the customers.”

When everyone at her home became aware of her new business, Mbabazi enlisted the services of her younger sister, Mary, with whom they would keep the shop in turns, so she gets some rest days. In effect, she feels the training she is giving her sister will be helpful if her sibling chooses to take that path one day.

In fact, Mbabazi has applied to pursue the Master of Human Resource Management at UCU and she hopes to meet the tuition requirements from the proceeds from the business.

While an undergraduate student at UCU, Mbabazi contested for the position of the Guild President, but lost. Even with the loss, she believes she learned invaluable lessons in the campaigns, which she hopes to put into practice in the near future as she seeks an elective office in the country.

How tourism is evolving in Africa and a rising force behind... 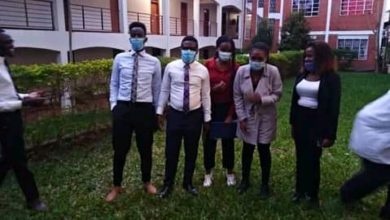